1912
Bishop Patrick Heffron founds Saint Mary’s College for the higher education of young men of the area, and the special training of those aspiring to the priesthood.
1933
Bishop Francis Kelly transfers Saint Mary’s College to the Brothers of the Christian Schools. Approval is sought from the Holy See because the college was viewed as an approved seminary, hence the transfer is not completed until 1943 under Bishop Leo Binz, Coadjutor Bishop of Winona.
1947
Bishop Binz writes to the Apostolic Delegate, Archbishop Cicognani, for advice about founding a diocesan seminary whose students would live in a Saint Mary’s College dormitory wing while taking classes there (February 4). In the fall, Fathers George Speltz and William Magee begin teaching on the faculty of the college with a core group of students who will be the first seminary community upon its establishment.

1948
Immaculate Heart of Mary Seminary is established by Bishop Binz (canonically erected July 16), and is incorporated in the State of Minnesota (September 24). Father Speltz is appointee rector, with an enrollment of 25.
1949
The first seminarian graduates from Saint Mary’s college (Paul Halloran, May 29). 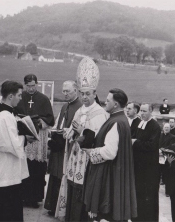 1950
Bishop Edward Fitzgerald is installed in the See of Winona (January 6) and completes architectural plans for a separate seminary dormitory (February). The Christian Brothers deed a plot of land to the Diocese of Winona from their property at Saint Mary’s College. Construction contracts are awarded (April 25), Fitzgerald breaks ground (May 1), and the cornerstone of Kelly Hall is laid by Binz (June 15), then Coadjutor Bishop of Dubuque, with all priests of the diocese present.

1962
St. Leo the Great Hall is blessed by Apostolic Delegate, Archbishop Vagnozzi, in the presence of Archbishop Binz in whose honor it was named (March 25).
1963
Father Speltz is consecrated Auxillary Bishop of Winona (March 25), later becoming Coadjutor Bishop of St. Cloud (1966, succeeding to the See, 1968). Bishop Fitzgerald appoints Msgr. Joseph McGinnis as rector.
1964
Dominican Father A. C. Fabian launches a thirty-plus-year teaching career with seminarians and college students in philosophy.
1966 -1967
All-time high in total enrollment is reached at 90 seminarians.
1968
Bishop Fitzgerald appoints Monsignor Roy Literski as rector.
1970
Post-conciliar remodeling is completed (March 6). Bishop Loras Watters appoints Father Robert Brom as rector. The Dominican sisters return to Switzerland, and are replaced by several School Sisters of Notre Dame (eventually including Sister Stanisia, who served fifteen years).
1971
New seminary guidelines are introduced, based on the newly approved national Program of Priestly Formation.
1971 -1986
73 Teens Encounter Christ (TEC) Retreats are offered by seminary students and faculty to the youth of the diocese.
1973
A 25th anniversary reunion of ordained alumni is held (June).
1974
Fitzgerald Retreat Center is established in Leo Hall for diocesan Priest retreats, in memory of the late bishop (who died in 1972)
1979
Bishop Watters appoints Father Gerald Mahon as rector. After serving as Rector of the Cathedral, Father Brom is named Bishop of Duluth (1983), and later of San Diego (1989 as coadjutor, succeeding to the See in 1990)

2022
Bishop Robert E. Barron was installed as the 9th Bishop of the Diocese of Winona-Rochester.
&nbps;

The crest used by IHMS is steeped in imagery and symbolism from the long traditions of the Catholic Church.

The crest was created in 2002 for the 60th anniversary of the patronage to the Immaculate Heart by Pope Pius XII in 1942.

The base of the crest is the red shield, symbolizing both the enlightening guidance of the Holy Spirit and the courage needed to respond to God’s call of discernment. At the top of the shield is a flur-de-lis, a symbol of Mary as well as of Joseph, the guardian of Jesus and disciples dedicated to Him.

At its center the crest holds Mary’s mystical rose, often portrayed with five petals, in white within a blue diamond. Both the diamond and color white are symbols of virgins, and blue is the traditional color of Mary. Within the mystical rose is the Immaculate Heart of our Heavenly Queen.

The banner across the bottom is the IHM motto, “Ecce Quam Bonum” which is Latin for “Behold How Good.” This phrase is the opening of Psalm 133 that goes on to say “Behold how good and how splendid it is where brothers dwell as one.”